Experiments is currently in private beta. If you're interested in testing this feature, contact support to learn how to enable Experiments in your RevenueCat project.

Once enough data has been collected, the LTV model will start making predictions. These predictions will be displayed on the experiment's page below its details. It can take up to 24 hours for results to be displayed, but early data might not be representative of your user base. Expect to wait longer (e.g. one week) to be able to gain any actionable insight from the results.

The inputs to the model are continually updated and shown here as the experiment runs. It is a current summary of the state of the inputs from when the data collection started to now (within 24 hours).

The LTV model is run once every 24 hours. If you're not seeing any data or are seeing unexpected results, try waiting 24 hours until the model can process more data. When you stop an experiment, the LTV model will continue to be updated for 14 days to capture any additional conversion. 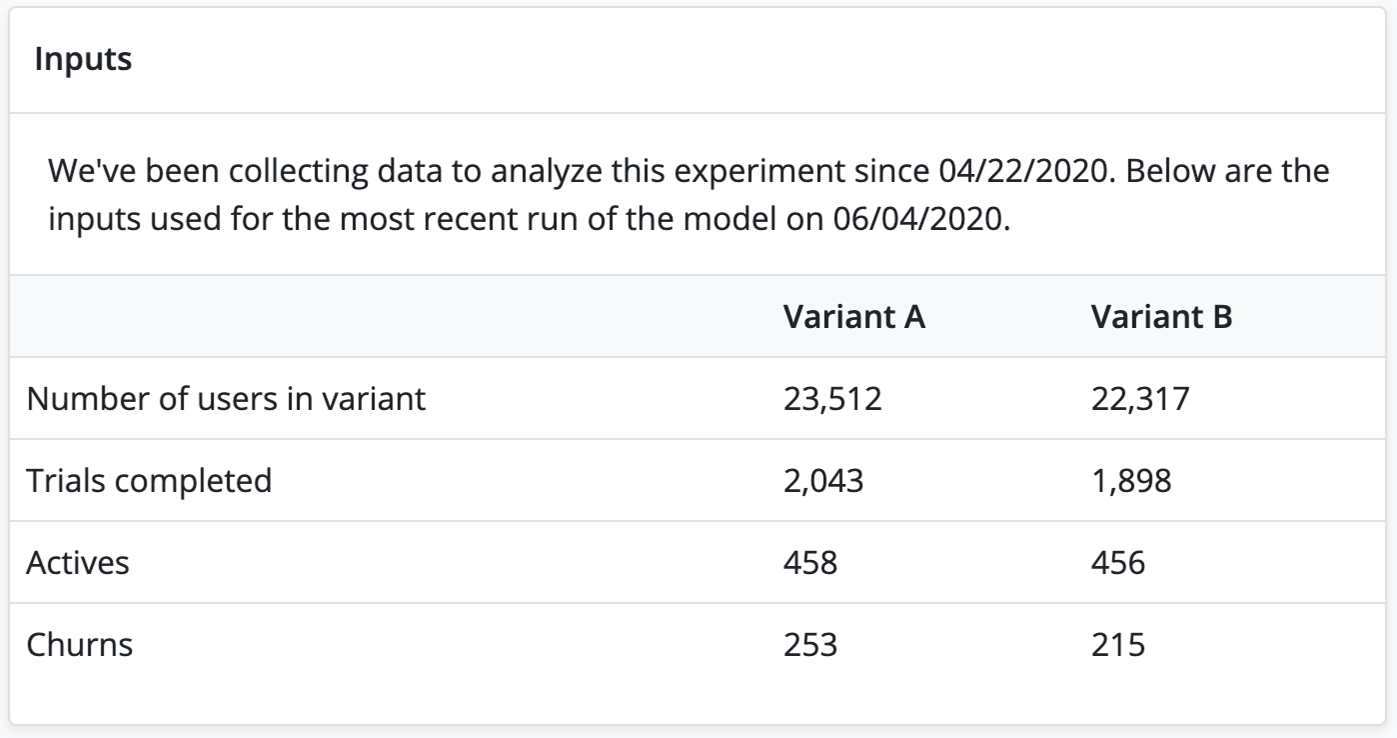 This section is useful for understanding your sample size. Larger sample sizes are less prone to flukes. The model factors this concern into its calculations, but it can be useful to understand how much data the model is processing and whether the results are skewed by the data.

Only new users are included in the results

To keep your A and B cohorts on equal footing, only new users are added to experiments. Here's an example to illustrate what can happen if existing users are added to an experiment: an existing user who is placed in a cohort might make a purchase they wouldn't otherwise make because the variant they were shown had a lower price than the default offering they previously saw. This might mean that the user made a purchase out of fear that they were missing out on a sale and wanted to lock in the price in anticipation of it going back up.

In the example shown in the below screenshot, there have been no trial completions, active subscriptions, or churn. While the model will be able to make a prediction (possibly with high confidence), it won't be representative of real-world user behavior, so in this case you should wait until you have a good distribution of data. 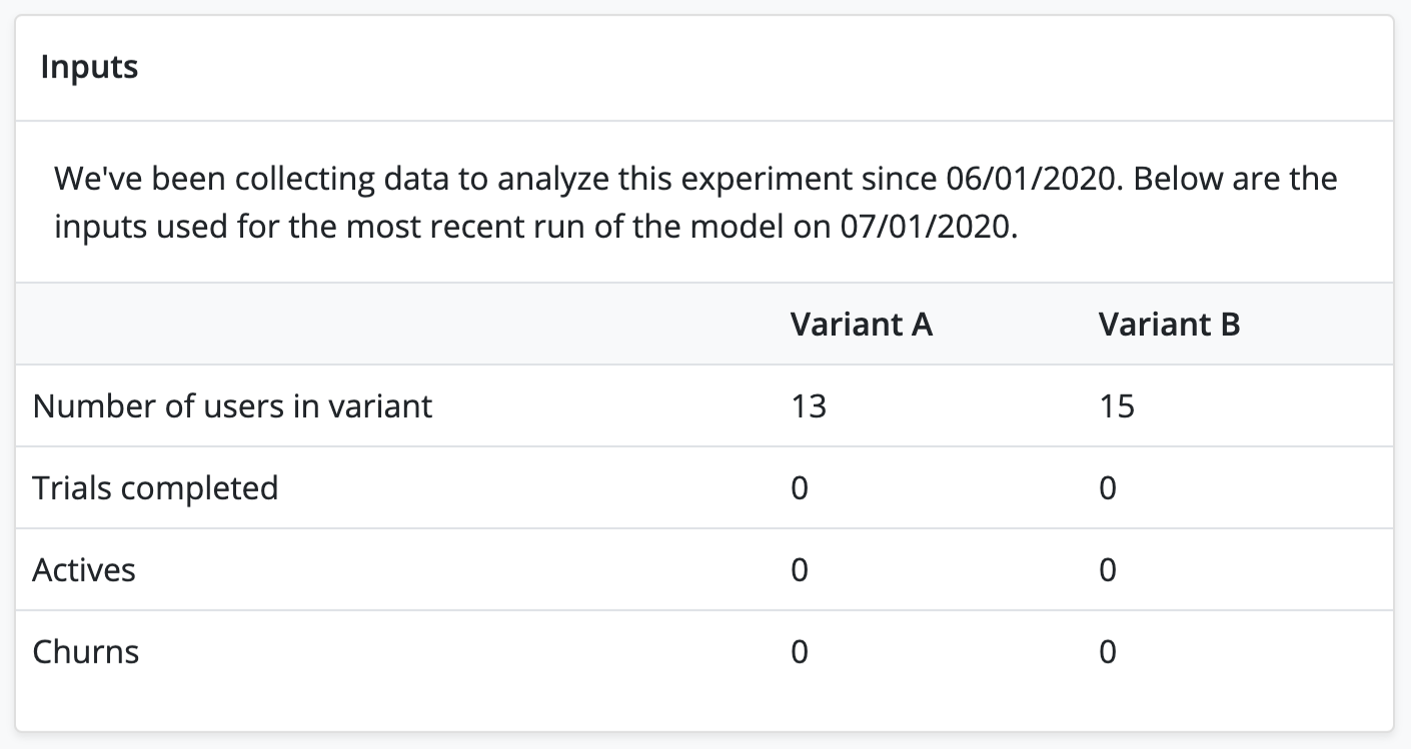 This section explains the probability that one variant has a higher LTV, how confident the model is in its prediction, and what the LTV might be for each variant. There are three parts to it: the LTV period, the LTV gauge, which shows which odds that one LTV is better at the current moment, and the chart, which shows the likelihood over time.

The model can predict the LTV over various time periods: 1 month, 3 months, 6 months, 1 year, and 2 years. Choosing the LTV period that will result in the best predictions for your app depends on your trial and subscription periods. For example, if you were A/B testing a monthly subscription and a yearly subscription, the monthly subscription might outperform in the 1 or 3 month periods but underperform on the 1 year period.

Note: shorter LTV periods have less uncertainty but more noise than longer LTV periods. For example, while the 2-year LTV period will smooth out the spikes of the 1-month LTV period, it will also be less certain of its prediction. Reference the LTV Chart and Predicted LTV charts to understand the best LTV period for your test - noisier data will cause more fluctuations in short term predictions.

The gauge is segmented into three sections:

The needle can move significantly day to day as more data is gathered. If you want to see a history of LTV predictions to spot trends, see the LTV chart.

The paragraph below the gauge explains the gauge's results, including not only the winning variant, but the confidence in the model's result.

The chart shows the likelihood that one offering has a higher LTV than the other over time. This chart can help you understand how the probability changed over time as more data was collected. It's normal to see the line fluctuate as more data is gathered such as initial purchases, renewals, churn, etc.

While every app and every A/B test is different, a "clear" winner is one in which the predicted LTV is comfortably within the "Favoring" or "Likely" segments. If the gauge is nearing or in the "Tossup" segment, check the LTV chart for any recent fluctuations that are throwing off the needle. If the LTV chart has such fluctuations, try increasing the LTV period.

In this example, the first screenshot shows the gauge indicating that the results are a tossup. However, the LTV chart seems to have a trend towards "Likely B" but the most recent data is swaying the gauge. By changing the LTV period to 3 Month in the second screenshot, the gauge matches our intuition about the trend, favoring B slightly more than A. While B is slightly edging out A, this result does not have a high enough confidence for us to choose variant B as the current offering. More tests should be done to optimize the LTV. Finally, when the LTV period is changed to 1 Year in the third screenshot, the model becomes less certain of its prediction, which means there is a significant probability that the results are due to chance.

The Predicted LTV chart predicts the LTV at certain points in a cohorts lifetime. They include one month, three months, six months, one year, and two years. These points often line up with renewals so that you can see the LTV predictions for two products with different subscription lengths.

Predictions further in the future will have longer wicks which represent greater uncertainty in the actual LTV. 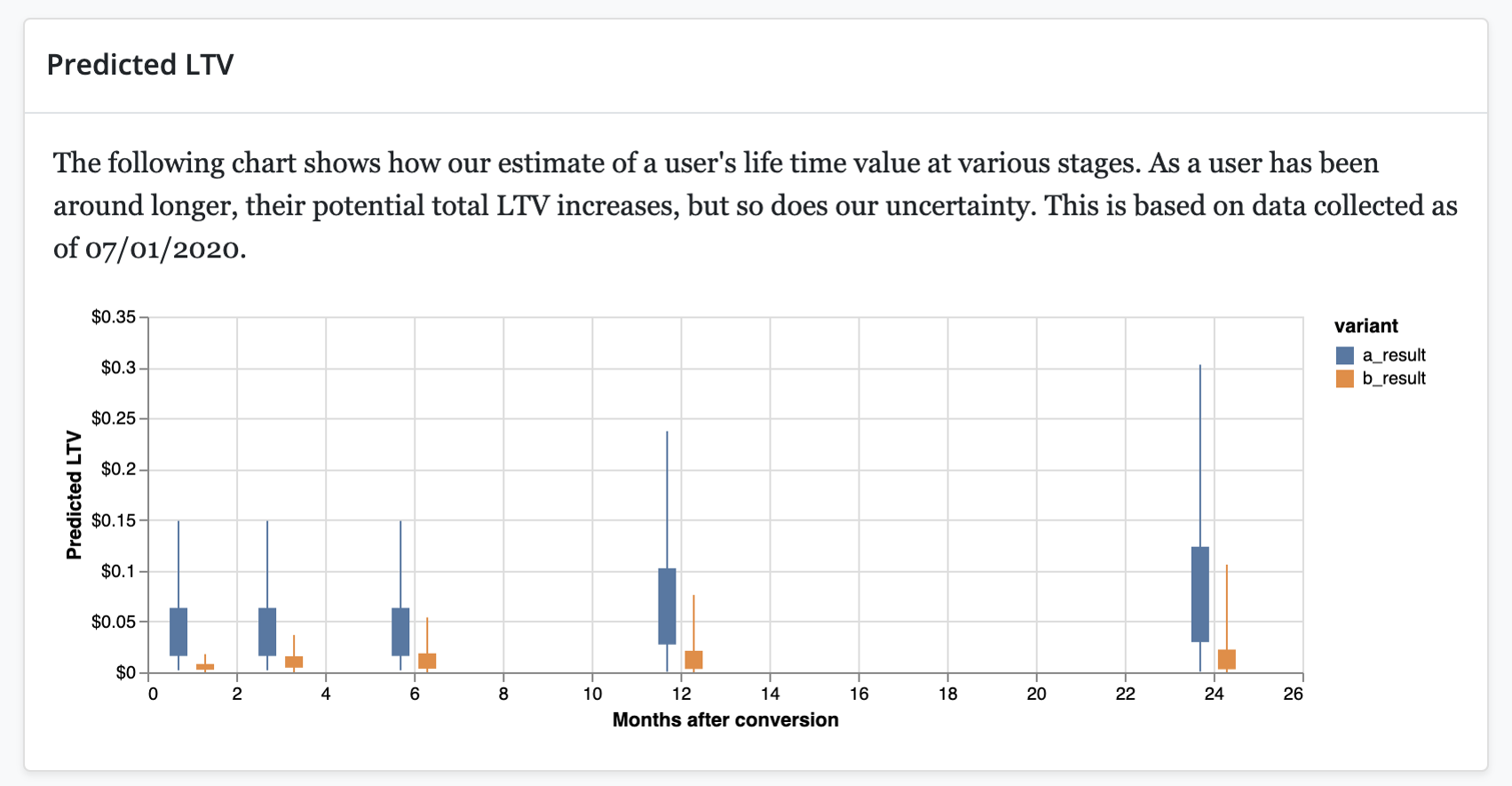 For example, in the following screenshot, the predicted 3 month LTV has the least amount of overlap. That means that the model is most confident predicting the 3 month LTV, followed by the 6 month LTV. Conversely, the 1 month and 2 year LTV predictions have significant overlap - these predictions are tossups.